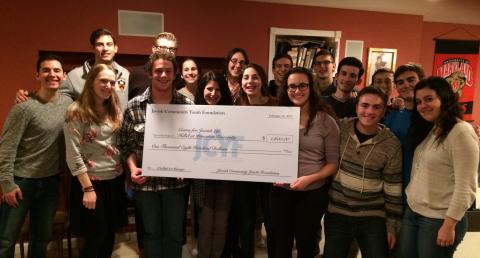 The Princeton University chapter of Challah for Hunger was recently awarded a $1,800 grant from the Jewish Community Youth Foundation (JCYF) – an initiative of Jewish Family & Children’s Service of Greater Mercer County.  The grant will be used to fund the chapter’s operations at the Center for Jewish Life – Princeton Hillel (CJL).

JCYF aims to teach Jewish teens, in 8th – 12th grades, how to be Jewish philanthropists. Participants learn about the power of giving as individuals and as part of a collective. The age-specific curriculum focuses on the principles of tikkun olam (repairing the world) and tzedakah (charitable giving). Teens are then given opportunities to research various local, national and global philanthropies and then are empowered to distribute a pool of money contributed to the foundation to support real-world causes.

There are 82 campus chapters of Challah for Hunger actively engaged in bakes around the country.  A total of 78,234 loaves were baked and sold in 2015-2016, with $275,759 donated to Mazon: a Jewish-sponsored hunger relief/advocacy organization and local food banks around the participating campuses.

Princeton’s Challah for Hunger chapter received its charter in 2014 and in the past three years, nearly 1,000 loaves of challah have been baked and sold by its student volunteer corps. Proceeds from challah sales have been donated locally to the Mercer Street Friends Food Bank in Trenton, NJ and to Mazon. In April 2016, Princeton students joined with alumni and volunteers from Mercer Street Friends to participate in The Great Challah Bake as part of the University’s on-campus celebration of 100 years of Jewish life at Princeton.  More than 200 loaves were baked and sold in the middle of the Princeton campus.

This year, Princeton’s Challah for Hunger program submitted a funding proposal to JCYF’s 8th grade program participants. Students visited the CJL and met with the chapter’s student leaders and representatives from Mercer Street Friends to learn first-hand about the program. Marni Blitz, Associate Director at the CJL, expressed the CJL’s gratitude for the partnership with JCYF.

“We were honored to be chosen as a grant recipient by the 8th grade participants of the Jewish Community Youth Foundation, a project of the Jewish Family and Children’s Service of Greater Mercer County. The middle school students spent time learning about the same Jewish values embodied in the goals of the Challah for Hunger program. The JCYF students could connect with the philanthropic activities of the Princeton college students, and we’re deeply grateful they celebrated this connection with the generous grant,” Blitz said.

To read about students at the AJC Muslim-Jewish Advisory Council in Washington, DC, click here: http://hillel.princeton.edu/blog/students-learn-about-ajc-muslim-jewish-advisory-council