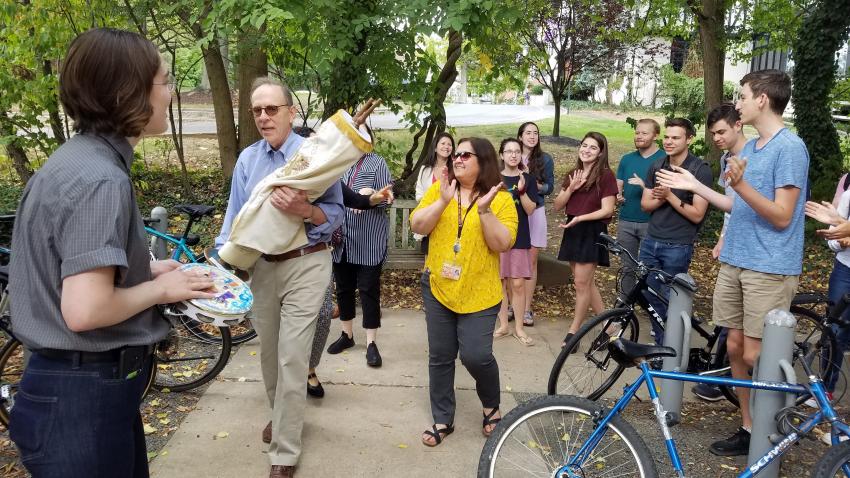 Students and staff dancing Czech Memorial scroll into the CJL

We are honored that one of our Torahs at CJL is Memorial Scrolls Trust Torah #227 originally from Rokycany Czech Republic of Bohemia. CJL is one of 1,000 locations throughout the world to house a Czech scroll and we wish to thank Mark Biderman '67 (pictured here, carrying the Torah) and his wife Wendy for securing this extraordinary Torah for our community to use.

During World War II, the Jewish communities of Bohemia and Moravia gathered their Torahs, gold and silver finials, books, and textiles from their devastated synagogues and sent them to the Jewish Museum in Prague. In a brave effort to subvert Nazi annihilation, workers in the Jewish Museum in Prague rescued 1,564 scrolls from destruction in 1942. Meticulously restored and painstakingly preserved, these scrolls stand as a remarkable tribute to the Jewish ability to survive, revive and regenerate.

The Czech scrolls are survivors and silent witnesses. They represent the lost communities of Bohemia and Moravia and those who perished in the Shoah. Memorial Scrolls Trust Torahs have been distributed to communities and organizations around the world. The scrolls are never sold or donated, but allocated on loan from MST to be utilized, honored, and cherished.

Our scroll, MST#227 was originally allocated to the East Bay Reform Temple, Bellmore NY in 1973. When they later merged with Temple Beth Am, Merrick NY who already had 2 scrolls - MST#227 was returned for allocation to our community – Princeton CJL. MST#227 is on loan to the Kesher (reform) community at Princeton where it is used regularly for services when school is in session. In September 2020, during the Coronavirus pandemic, MST#227 was featured around the world, while it was read during CJL’s Reform High Holiday virtual services.

Although many Jewish lives were lost, the continuation of Jewish culture, tradition, and memory lives on through the preservation of the Czech scrolls housed at Princeton’s Center for Jewish Life.