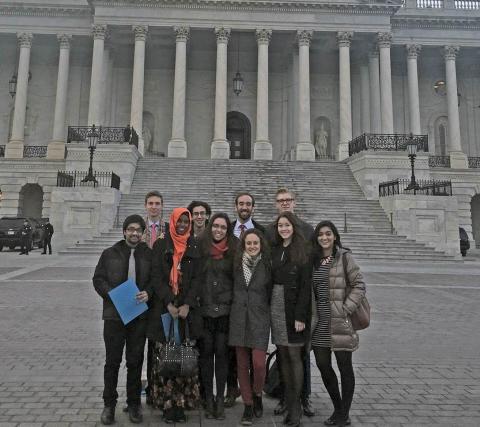 During the recent intersession break, a group of 10 Jewish and Muslim students traveled to Washington D.C. to learn about the advocacy work carried out by AJC's Muslim Jewish Advisory Council.  Rachel Silverman ’20 coordinated the trip.

AJC is the leading global Jewish advocacy organization, with offices across the United States and around the globe, and partnerships with Jewish communities worldwide.  Its mission is to enhance the well-being of the Jewish people and to advance human rights and democratic values for all.  In November 2016, AJC and the Islamic Society of North America (ISNA) co-convened the Muslim-Jewish Advisory Council (MJAC).  This new council is a tangible example of AJC’s commitment to joint work with the American Muslim community for the benefit of the entire country.

Participants in this trip engaged with Muslim and Jewish congressional staffers engaged in advocacy work on Capitol Hill and learned about the process of lobbying Congress.  Students had meetings at the offices of Rep. Bonnie Watson Coleman (D-NJ) and Sen. Robert Menendez (D-NJ).  In the evening, the group attended a MJAC reception hosted by Sen. Ben Cardin (D-MD) and Sen. Orrin Hatch (R-UT), where they were able to mingle and talk to the influential members of the council.

“The trip down to AJC and the Capitol was an eye-opening experience,” said Laraib Ilyas '18, who has coordinated other Muslim-Jewish events with Silverman since the conference. I enjoyed hearing the experiences of Muslim and Jewish congressional staffers, and low-key lobbying for the MJAC as well. Through this trip, I learned that Muslims and Jews have a lot more in common than most tend to think and there are many issues of concern that affect both communities. I'm really looking forward to building better relationships between the two religious groups on campus.”

In the most recent issue of the Princeton Alumni Weekly, President Eisgruber addresses Muslim life at the University and highlights the long-standing, collaborative relationship between CJL Executive Director and the University’s Jewish Chaplain Rabbi Julie Roth and Imam Sohaib Sultan, Princeton’s Muslim Chaplain.

Silverman believes that sending this group of Princeton students to the MJAC event was “instrumental” in establishing a core group of Muslim and Jewish Princeton students who are dedicated to continuing the efforts to facilitate relations between these two communities on campus.

To read about Challah for Hunger receiving a grant from a community foundation, click here: http://hillel.princeton.edu/blog/princeton-u-challah-hunger-receives-community-foundation-grant